Fluoride is a natural mineral found throughout the earth's crust and widely distributed in nature. Some foods and water supplies contain fluoride. Fluoride is often added to drinking water to help reduce tooth decay. In the 1930s, researchers found that people who grew up drinking naturally fluoridated water had up to two-thirds fewer cavities than people living in areas without fluoridated water. Studies since then have repeatedly shown that when fluoride is added to a community's water supply, tooth decay decreases. The World Health Organization among many other organizations has endorsed the use of fluoride in water supplies because of its effect on tooth decay. 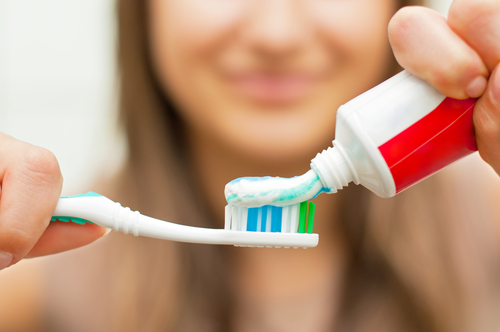 What are the benefits of fluoride?

Fluoride has been researched for over 50 years and water fluoridation has been proven to cut dental decay by 40 to 60%.  Fluoride is present in many different natural sources, but can also be artificially added to our drinking water.  Fluoride can greatly help dental health by strengthening the tooth enamel, making it more resistant to tooth decay.

If your drinking water does not have fluoride added, fluoride toothpaste is effective.  However, some people are more prone to dental decay.  If so, the dentist may suggest using fluoride supplements, which can help to reduce dental decay.  The amount of fluoride in toothpaste is usually enough to lower the level of decay.  In areas where the water supply is fluoridated, fluoride toothpaste provides additional protection.  However, in these areas, children under 7 years old should use one of the toothpastes containing lower levels of fluoride.

Where can I find fluoride?

All water contains fluoride.  The West Midlands has the biggest water fluoridation scheme in the UK, which serves over three-quarters of the local population. There are also smaller schemes in operation in other parts of the country, including the North East, the East Midlands, Eastern England, the North West and Yorkshire and Humber.  One part of fluoride for every million parts of water (1ppm) is considered an ideal amount to reduce decay rates. Courtesy of the British Dental Health Foundation, Fluoride also comes in specially formulated gels, drops, tablets or mouthwashes which are recommended for those people who need added protection. Fluoride is also in salt and tea, and some countries artificially add fluoride to their table salt and milk.

Is it in my water supply?

As stated before only around 10% of the UK population’s water supply – mainly the Midlands and the North East has water fluoridation. The exact amount depends on which area you live in.  Your dentist or health authority should be able to tell you whether your water supply is fluoridated.

Should children have extra fluoride?

Many areas have enough fluoride in the water to help fight tooth decay.  However, where the level in the water supply is low, it is sometimes necessary for children to take extra fluoride in the form of supplements.  It is extremely important that these are only taken on the advice and instruction of a dentist.

What are the side effects?

‘Dental fluorosis’ can occur when too much fluoride is taken.  This can happen for example when the water supply is already fluoridated and supplements are taken, or when children ‘eat’ toothpaste.  Campaigners against fluoridation claim that an overdose of fluoride can sometimes cause ‘brittle bone’ disease and digestive disorders, but these suggestions have not been scientifically proven.

Enamel fluorosis is a result of too much fluoride, absorbed while the  enamel of the teeth is forming.  Severe fluorosis may lead to pitting of the enamel and discolouration.  However, severe fluorosis is rare in the UK. In its mildest form, fluorosis appears as very fine pearly white lines or flecking on the surface of the teeth.  This mild fluorosis is often undetectable except by a dental expert.

Many reports have been published about the pros and cons of fluoride.  After many years the scientific conclusion is that fluoride is of great benefit to dental health and helps to reduce decay, while causing no harmful side effects to general health. Here at Gentle Dental Care in St Andrews we routinely recommend the use of fluoride toothpaste for our patients.